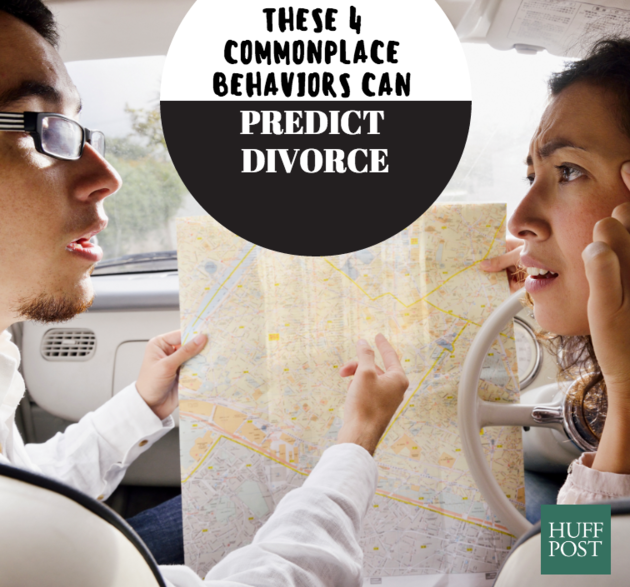 According to renowned marriage therapist John Gottman, there are four behaviors that can reliably predict the end of a marriage — and you’re probably guilty of them.

For 40 years, the psychology professor and his team at the Gottman Institute have studied couples’ interactions to determine the key predictors of divorce — or as Gottman calls them, “the four horsemen of the apocalypse.” The communication sins are more mundane than you’d think: criticism, contempt, defensiveness and stonewalling (emotionally withdrawing from your partner)

Below, experts trained in the Gottman Method of couples therapy share their best advice for avoiding these behaviors in your own marriage.

Criticism isn’t simply complaining to your spouse about their dishwashing technique or smartphone use. As Gottman Institute staff writer Ellie Lisitsa explains, “a complaint focuses on a specific behavior, while a criticism attacks the character of the person.” In other words, it’s a verbal attack meant to inflict emotional pain.

How to avoid it:

1. Think about what’s really bothering you before criticizing your spouse.

“Before approaching your partner, take a few moments to figure out what the issue you need to bring up actually is. Then, take time to change your criticism into a complaint: Instead of saying ‘You always leave your shoes on the floor,’ say, ‘I’d appreciate it if you put your shoes in the closet.’” — Danielle Kepler, a therapist based in Chicago, Illinois

2. Don’t say everything that’s on your mind.

“In other areas of our lives we are able to filter how we tell someone else we are upset with them. For example: If we are upset about something at work, we don’t just storm in our boss or colleague’s office and tell them exactly what we think. We often think it through, maybe vent to a friend and then really prepare what we are going to say to them. This same kind of filtering needs to happen in our marriages.” — Christianne Judy, a therapist based in in O’Fallon, Illinois

3. Turn your criticism into a wish.

“More often than not, hidden beneath the harsh words of criticism are tender feelings and needs. Instead of being critical, try to gently share what you’re feeling and what you need most from your spouse.” — Robert R. Rodriguez, a psychologist based in Chicago, Illinois

Contempt is the worst of the four horsemen — and the number one predictor of divorce, according to Gottman. Contemptuous behavior includes eye-rolling, sarcasm, hostile humor and name-calling.

How to avoid it:

2. Make a point to show how much you value and appreciate your partner.

“Contempt develops when either partner feels unvalued. Make it a habit to tell your partner one thing they do each day that you appreciate. It can even be something small, like making you coffee in the morning.” — Danielle Kepler

3. Remember: Delivery is everything.

“When you’re contemptuous, you’re saying: ‘I think you’re beneath me.’ Is this really the message you want to send to someone you love? I tell my clients to stop putting the problem on their partner. Your partner isn’t the problem — the problem is the problem.”— Elizabeth Earnshaw, a therapist based in Philadelphia, Pennsylvania

You can read the rest of the article here: http://huff.to/2abSBXH