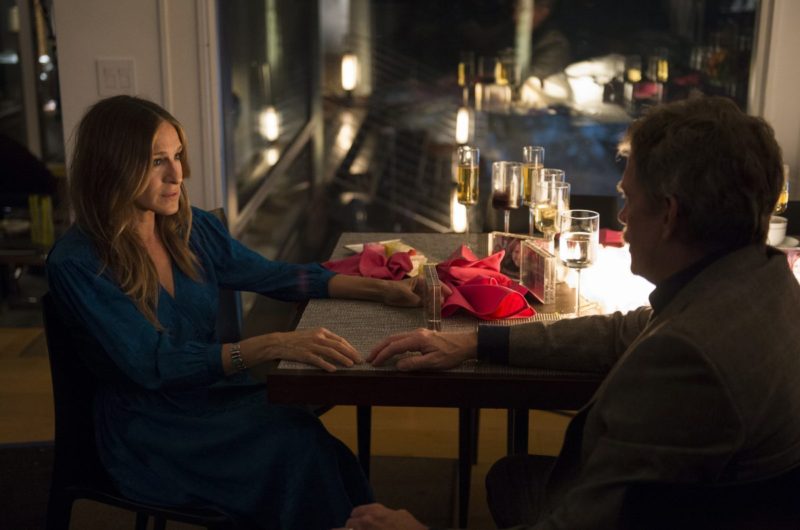 Frances and Robert Dufresne hate each other; got it? Good. Welcome to Divorce, a caustic new HBO comedy from Catastrophe co-creator and star Sharon Horgan. Set in the casually wealthy enclave of Westchester County, Divorce tracks the escalating horror of Frances and Robert’s separation with a realistic lack of sentimentality. In the opening scene of the pilot, Frances (Sarah Jessica Parker) is peering intently into the bathroom mirror when her husband interrupts to ask if she heard him knocking earlier. “I was forced to take a shit in this coffee can in the garage,” Robert (Thomas Haden Church) says. “Just wanted you to know.” Frances doesn’t look up. “Ok,” she says. When he walks away, she flips him the bird.

Catastrophe, a British comedy available on Amazon Prime in the U.S., follows a couple through the beginning of their relationship, from what they assumed would be a one-night-stand through the birth of their first and then second child. Divorce begins at the end, which perhaps accounts for the lack of Catastrophe’s warmth and shaggy-dog appeal. Divorce is nothing if not messy, and yet this vision of domestic disarray feels coldly clinical, as if afraid to knock a strand of Parker’s perfectly coiffed hair out of place.

A mutual friend’s 50th birthday party incubates Robert and Frances’s eventual separation. After birthday girl Diane (Molly Shannon) gets sloshed and aims a gun at her husband, Nick (Tracy Letts), Frances wonders aloud, “How do you go from eight years of happy marriage to wanting to blow someone’s head off? What if the same thing happens to us?”

Frances, we later learn, is having an affair with a Columbia professor named Julian, played with much-needed charm by Flight of the Conchords’ Jemaine Clement. When Robert finds out, it’s on. “I’m gonna make your children hate you,” he snarls, locking Frances out of the house.

Thomas Haden Church and Sarah Jessica Parker are completely believable as a couple in hate, but there’s not much there to indicate what they might have seen in each other once upon a time. Five episodes in, Frances is the more fully-drawn character, but Robert gets all the good lines — Church is such a magnetic presence, he unfairly makes Robert more appealing than Frances, who mostly chides and cajoles. (For all her charms, Parker isn’t the warmest actress; that’s what made her such a perfect choice for Sex and the City’s Carrie Bradshaw, who was, rather pointedly, not the warmest character.) “You’re Jesse James and I get to be Sandra Bullock!” Robert yells when he first discovers Frances’s affair. When he and Frances visit a mediator, attempting to keep the split civil, he merrily tells the woman, “It’s like the first day of divorce school. I want to be a good student.”

Church has a wonderfully booming, angry-whiny voice that perfectly suits the role of cuckold. I like his ne’er-do-well shtick (where my Ned and Stacey fans at?!), and the way he enunciates every word as if whatever he’s saying is the most obvious thing in the world. But I quickly grew tired of watching him unleash his fury on a series of random, unsuspecting shmucks. When Robert, a contractor, drops in on an open house to loudly talk up the granite countertops, the real estate agent asks him to leave. His response: “If I wanted my balls crushed and stuffed up my ass I’d stay at home.” Har-de-har.