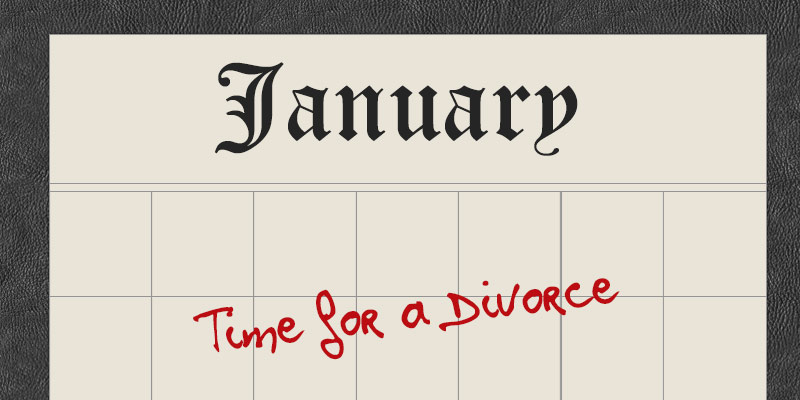 This article was written by Kelli B. Grant at CNBC

Couples starting the new year with a divorce may find untangling finances is no easy feat.

Data from the University of Washington found that divorce filings start to pick up in January — a trend researchers theorized could be fueled by a rough holiday season. Filings peak in March and then again in August, they found, before declining in the fall.

The right time to start separating joint finances depends on the divorce, said John Slowiaczek, president of the American Academy of Matrimonial Lawyers. Some couples draw a line in the sand, preferring to obtain court orders to set out their obligations and separate their finances while the proceedings take place.

“Most often, I think the benchmark you would say is at the decree,” he said. “That’s when most people start the unraveling.”

(Whichever approach you choose, check in with your lawyer before you make any big financial changes during the proceedings, he said.)

Once that’s final, one of the first “to-dos” is reading your divorce agreement for a list of tasks to prioritize and deadlines to meet, said Lili Vasileff, a certified financial planner and the president of Divorce and Money Matters in Greenwich, Connecticut. Drag your feet on these, and you could end up back in court for failure to comply.

“You really need to read your agreement very carefully,” said Vasileff, who provides clients with a post-divorce checklist to help them avoid missteps.

If you’re in the midst of a divorce, here’s how — and when — to update your financial plan.

Remove your spouse from power

As soon as you file for divorce, update any powers of attorney or health-care directives you have that give your spouse the right to act on your behalf should you become incapacitated, said Slowiaczek, who is also the managing principal at Slowiaczek, Albers & Astley in Omaha, Nebraska. Name a trusted friend or family member to that position instead.

“You don’t want your

[soon to be ex-] spouse to make life or death health-care decisions for you,” he said.
Don’t have such documents? Get them in place as soon as possible. Otherwise, your spouse may still have some control over your finances and health care if you become incapacitated before the divorce is finalized, said Slowiaczek.

You can read the other half of this great article on CNBC here: http://cnb.cx/2jKd2B9