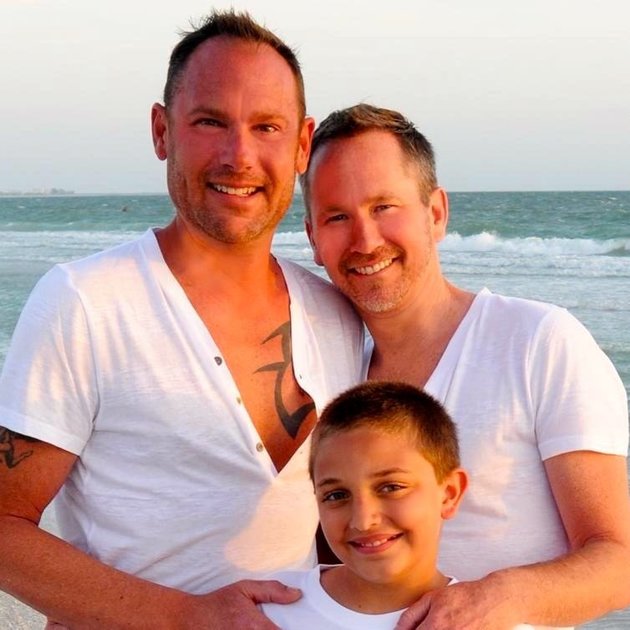 Each Friday in September, RaiseAChild celebrates foster and adoptive parents who have chosen to place the needs of children ahead of their own in a special “Let Love Define Family®” series for Huffington Post Queer Voices. This is the last of five special series installments.

James McKinney put his family together in a remarkable manner. In this “Let Love Define Family®” interview, the couple shares their unusual journey to parenthood with RaiseAChild Founder and CEO, Rich Valenza.

Of all the foster and adoptive parents I’ve met so far through my work at RaiseAChild, no one has a story like James McKinney. Not only are the circumstances of his path to parenthood unusual, but the parenting story he continues to build with his son Micah and his partner Bruce Walker truly epitomizes the point of this “Let Love Define Family®” special series.

JAMES McKINNEY: I was about 33 years old and working in finance at an automotive dealership in Memphis. One of the administrative assistants and I went to lunch one day. She was crying and all upset because she had a family member that had a baby and the situation was less than ideal. She said that the state was about to step in. The baby would likely be lost to social services. I told her I was interested in helping. I told her I would take the baby.

JAMES: I already knew that I wanted a child and I knew details of this situation. I just immediately said I’ll take him. The next morning, I get a call from the grandmother. I thought she and I were going to talk more about things. But right away, the grandmother said she would have him ready when I got off work that evening.

JAMES: She pretty much told me, “I have some formula and a diaper bag. I’ll have him ready at 5:30.” I went to pick him up as soon as I got off work. I called my sister and she had a full nursery set up by the time I brought Micah home.

RICH: Were you nervous? Your heart was racing? Or were you just walking through this? How’d this go?

JAMES: You know, it was very surreal. I was definitely nervous. Didn’t know how this would play out. The whole process started and everything was backwards from a traditional adoption. But I knew it was a bad situation and decisions had to be made quickly. It needed to be done. Someone had to step in and help this child and this family. I think I was on a bit of an adrenaline rush.

RICH: What was your life before the moment that you went to lunch with this woman? Who were you? What were you doing?

JAMES: Oh my goodness! My life was completely different prior to that lunch. I had a partner at the time, but no kids. I owned several houses, because I would buy houses, renovate them, and flip them in addition to my job. Every night, I was free to go out to dinner anywhere or wherever I wanted. I could travel on a day’s notice and take a vacation any time I wanted. There was nothing tying me down in any direction.

RICH: So tell me about picking him up from his grandmother. How old was Micah at the time?

JAMES: He was four-months-old. There were some health issues and he was just screaming and crying. I put him in the car seat, in the back seat, I strapped him in, got in the car, started to drive off, and he was still screaming. I reached back and just laid my hand on top of him and he stopped crying. I drove the entire way home with my hand on him in the back seat. We spent the next year like that.

I came from a large family. I just always wanted kids. Prior to being in Memphis, I was in Mississippi, and they had passed a law banning gay adoption. I had talked to a woman with child services in the Mississippi foster care program to start an adoption process. She was willing to help, but she said that because I had a partner, one of us, on paper, would have to move out. It would have to be a single parent adoption. My former partner and I weren’t willing to do that. Living in that situation, I wasn’t going to go through a state process and basically lie on all these forms, then go to a courtroom and lie in order to get through this process. So it didn’t happen in the state of Mississippi. Moving back to Tennessee, I knew this would be a possibility. This situation raised its head within a week of moving back to Tennessee.

RICH: Your partner at the time, how did he take to all this?

JAMES: He had a lot of hesitation. I think I was one who always wanted to adopt. It was a bigger priority for me. He came from a family of five and he was the youngest. So it just wasn’t high on his list. But he was supportive.

RICH: What was the process like then? After you picked the baby up?

JAMES: Within the next week I went to juvenile court, in Tennessee, to apply for custody. I’d already spoken with an attorney and she told me this step was so easy that I could just do it myself and save a little money. I went to file a petition for custody. When I did, Micah already had an open case there because of previous family issues. The lady in the children’s court accused me of buying my son. She insisted that there was something illegal going on. What I did not know in this process, was that custody had just changed to the grandmother that week. She had gone to court and accepted the custody. I did not have knowledge of that. I thought I just needed to step in and get this all cleared up. At this point, I didn’t even have the right to take him to a doctor. The clerk accused me of buying him, he was in the house with two gay men, she was going to contact the sheriff’s department and have him picked up. She refused to accept the petition. The next day, Memphis was shut down by a big snowstorm. The day after that I was in meetings and got a phone call where I was pulled out of the meetings because this woman from the juvenile court was calling wanting to know where the baby was. She was calling the sheriff to come pick him up. I contacted my attorney who put it all to rest within an hour. They had the supervisor at juvenile court ask me to come back in and sign the application to go through custody.

Read more about it here: http://huff.to/2eD9wHA