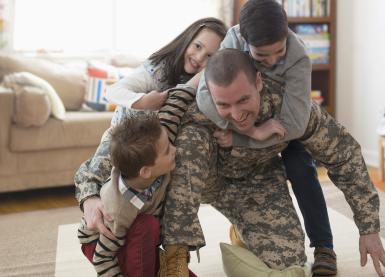 The Uniform Law Commission, an influential group of some 350 attorneys appointed by all the states, met in Nashville on Wednesday and gave final approval to the Deployed Parents Custody and Visitation Act. It is a set of uniform codes that state legislatures can adopt to standardize custody rights for parents who are deployed.

With deployments on the rise from the first Gulf War through the Iraq and Afghanistan wars, especially for National Guard and Reserve members, a majority of the states have implemented a patchwork of laws designed to protect service members in child custody and visitation cases. But the rules aren’t consistent across the country, says Eric Fish, legal counsel for the Uniform Law Commission.

Some of the issues state courts have struggled with include how to determine jurisdiction when a military member is assigned to a base in another state, whether a stepparent or grandparent can have visitation rights when a parent is deployed, and whether a temporary custody arrangement should be made permanent when a parent returns from assignment.

“States are all across the board on those issues, so the impetus for the uniform act was to provide states with a well-conceived piece of legislation that takes the best practices from all the states that we have seen and give them some guidance,” Fish said.

The commission has been crafting consistent state laws for over a century, including the Uniform Child Custody Jurisdiction and Enforcement Act, which is used in 49 states as a standard for establishing jurisdiction and child support orders between states. Its drafts are recommendations and need to be enacted by state legislatures.

Navy Petty Officer 2nd Class John Moreno deployed in 2007 while his wife was pregnant with his daughter, Vanessa, at their home in Virginia. But when he returned, he found his wife had moved to Arizona and refused to let him see his daughter.

“She had fled from Virginia, where my daughter was born, to Arizona along with everything I owned and my daughter,” he said. “She was 7 months old.”

He petitioned a judge in Virginia to order her to return his daughter, but he said the judge claimed that he didn’t have jurisdiction because Moreno had been given military orders to leave Virginia.

“The state of Virginia had jurisdiction and had every right to bring her back,” Moreno said.

He’s gone through a string of attorneys, but never had any legal success. He said he feels like he has fewer rights in the custody case because he is a service member and the courts don’t know what rights he is afforded under the federal Servicemembers Civil Relief Act. That offers legal protections to service members during their military service, such as suspending certain judicial proceedings.

“It seems like every time I go to court I get beat up because I am in the military,” said Moreno, who is 31 and living in New Orleans, working as an air traffic controller for the Navy.

Federal legislation has been introduced in Congress to amend the Servicemembers Civil Relief Act to include protections in child custody cases. But the Uniform Law Commission, which writes only state legislation, has opposed this effort because they argue family law is a states’ rights issue.

Commission legal counsel Fish said while the proposed federal law and the uniform state code share some similarities, federal law is vague and would create unnecessary complexity to an already complicated area of law.

“Service members themselves are going to be completely lost because they are going to hear there is a federal law and not understand the difference of who is in charge, federal or state law,” he said.

You can read the rest of the article here: http://bit.ly/2a6poil