Watch out for tax scams on email, Facebook and your phone

Home › Blog › Watch out for tax scams on email, Facebook and your phone 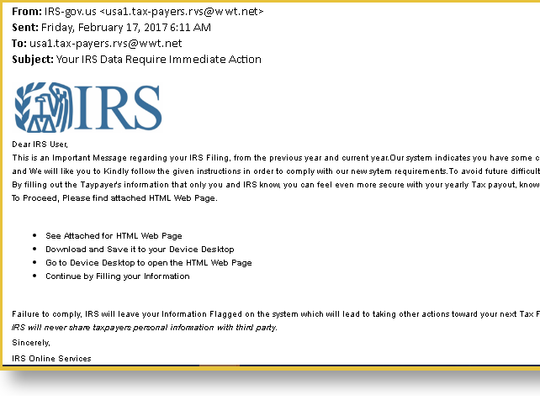 Watch out for tax scams on email, Facebook and your phone

As if tax time weren’t tough enough, scammers are doubling down efforts to steal more of your hard-earned money. According to the Internal Revenue Service, there’s a spike in online tax scams and an aggressive phone scam is making the rounds again, too.

Here are the top telltale signs to help you spot a scam in your email, Facebook, or on your phone — before it can do any real damage.

THE SCAM: The “IRS” calls — and they’re coming to arrest you

The first telltale sign of this scam is that it’s an out-of-the-blue call from the “IRS,” threatening to arrest you. Scammers often use fear to intimidate you and catch you off guard, and this one does both.

The way it works is like this: You get a phone message or call from someone “from the IRS,” or the “IRS legal department.” The person says that they’ve put a warrant out for your arrest and if you don’t make a payment over the phone immediately, you’ll be hauled off to jail. The scammer might even give a “badge number,” and throw around terms like “tax fraud” and “outstanding liability” to suck you in. They also tend to target the elderly, immigrants, and college students — people who might be easier to convince that they’ve made a mistake on their taxes.

THE FIX: Hang up!

Whatever you do, don’t pay a cent! The IRS does not initiate contact over the phone, nor do they “hunt you down” and threaten to send police to your door. Scammers often claim that you must pay your bill using a prepaid debit card, or seven iTunes gift cards, and that’s another thing the IRS just does not do. If you get one of these calls, hang up and report it immediately.

THE SCAM: The “IRS” emails you

Read the rest of the article by clicking the link: http://usat.ly/2npawos